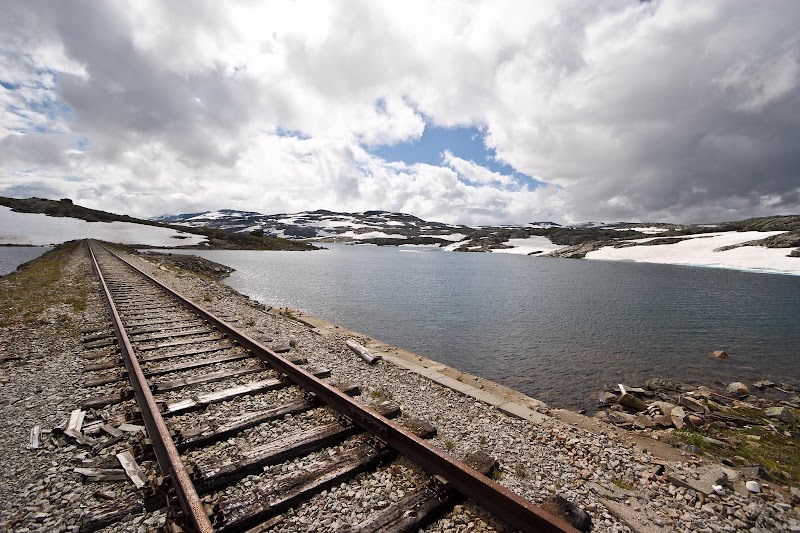 The Finse Tunnel (Norwegian: Finsetunnelen) is a 10,300-metre-long (6.4 mi; 11,300 yd) railway tunnel west of the village of Finse in Eidfjord Municipality in Vestland county, Norway. The tunnel is part of the Bergen Line between the cities of Oslo and Bergen. It is the longest tunnel on the line, and the third longest railway tunnel in the kingdom. Inside the tunnel, at 1,237 metres (4,058 ft) elevation, is the highest point on the Norwegian railway network.The tunnel was constructed to increase the regularity of the line past the Finse peak which was often blocked by snow. Planning started during the 1980s to remove this section that was regularly snowed down, and at the same time reduce the length and increase the speed of the railway. Construction started in 1990, and it was opened by King Harald V on 16 May 1993. Following the construction of the tunnel, 32 kilometres (20 mi) of railway around this area was also rebuilt to achieve higher train speeds, a shorter overall distance, and to maximize the natural protection from the weather. This was built in five stages, opening between 1995 and 1998. Wikipedia

Taugevatn (also called Tågavatni) is a lake on the south side of the Bergen Line in Ulvik municipality in Vestland county, Norway. It sits at 1,296 metres (4,252 ft) above sea level. The railway had its summit here, at 1,301.7 metres (4,271 ft) above sea level, until the Finse Tunnel was built which led to the closure of the route past the lake on 16 May 1993. After the tunnel opened, the highest point on the line became 1,237 metres (4,058 ft) above sea level, at kilometre 306.90 inside the tunnel. Taugevatn drains via Fagervatnet lake (at the same elevation) to the Ustekveikja river, which feeds Ustevatn lake in Hol Municipality in Buskerud. Wikipedia